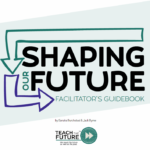 Shaping our Future is a facilitator's guidebook for high school students who want to develop scenarios and plans for the future. It is similar to the Futures Thinking Playbook, but more suited to older students and even adults.

The book is published by Teach the Future with permission of the authors under the Creative Commons license BY-NC-SA (Attribution, Non-commercial, Adaptation under the same license).

You can see a video of the workshop in action thanks to the Brandwein Institute.

From the Foreword by Betty S. Flowers, Scenario Writer

As a futurist, the question I’m most often asked is, “What is the future going to be?” I always answer that the future is unpredictable—and that, therefore, any story about the future is a fiction. The futurist is not so much a fortune-teller as a storyteller.

What kind of story is the most useful when it comes to the future? The answer to that question is: the story that is created by the people who will live in it. Scenario-building is a powerful process because as people create fictions of the future together, they begin to experience how much power they have to tell their own story—and thus, to create their own future.

The power of storytelling can be seen most clearly in the life of an individual. Each of our lives is a collection of facts. And these facts have actually happened. There’s nothing we can do to change them. But the facts are embedded in a story we tell about ourselves. And while the facts of the past are beyond our ability to change, the narrative of the facts is completely in our power to shape. The reason this is important, especially for young people, is that the future is shaped not by the facts, but by the story we tell about these facts.

For example, suppose someone had a terrible disease as a child. This fact could be embedded in a hero story—“against great odds, after overcoming a terrible disease, Robert managed to get his high school degree.” Or we could tell the story as a victim story—“Because of his disease, Robert was forced to spend twice as many years in high school as his friends.” Or the story could be told as a history of learning—“After contracting a terrible disease, Robert learned how to be patient. And this patience, developed to a high degree, was crucial to his successful career as a psychologist.” Depending on the story you’re telling—whether that story is about the past, the present, or the future—the facts can “make” you a hero, a victim, or a learner. is one of our least acknowledged powers. Most young people unthinkingly accept the stories that are given to them by their parents and their culture.

And many of these stories, especially those that come from the commercial side of our culture, are useless, or even actually harmful. They implicitly tell us that we are not thin enough or rich enough or something else enough—which is why we need to buy a particular product to be thin or rich or something else. Scenarios are antidotes to the implicit stories we find in popular culture because they are explicitly constructed rather than unconsciously accepted.

Scenarios also function to educate the imagination by helping it to be flexibly oriented toward the future. This flexibility means that we approach the future not with a belief about what it will be, but with a set of possibilities—two or more scenarios that encourage us to think about the future in different ways.

Many large corporations spend a great deal of time and money to build useful, challenging scenarios. What makes this book special is that it shows how, with limited time and money, a scenario workshop can be designed and administered so that a group of young people can have the deeply liberating experience of what it means to shape a destiny—or two or three.

This site is affiliated with Teach the Future, a nonprofit dedicated to bringing futures thinking to classrooms around the world.